Finally another clear night presented itself last night, and I replicated my testing of PE with the new RA worm block in place.

I tried data gathering with longer exposures, but didn’t like what it was telling me, then realized I was on the wrong track anyway;  I should keep my data gathering to short exposures and let the fact that I am averaging the PE over multiple worm cycles handle smoothing out the seeing.  This is consistent with all the advice in the Bisque support forum too.  So I increased to gathering more worm cycles – 7 cycles. 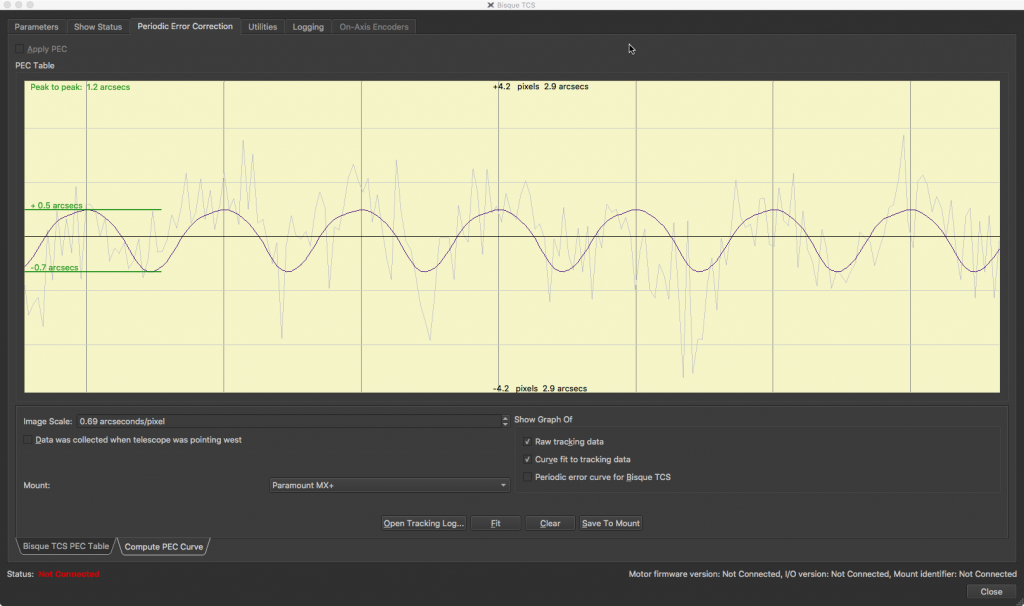 Uncorrected, the worm is averaging out at 1.2 arcseconds peak-to-peak, and even looking at the raw data, the worst case swing is 2.9 arcseconds. That difference shows the seeing jitter.  This is really good performance – the guaranteed spec from Bisque is 7 arcseconds, so the worm is ‘way outperforming that, and is below seeing.

Then another 7 cycles with PEC turned on: 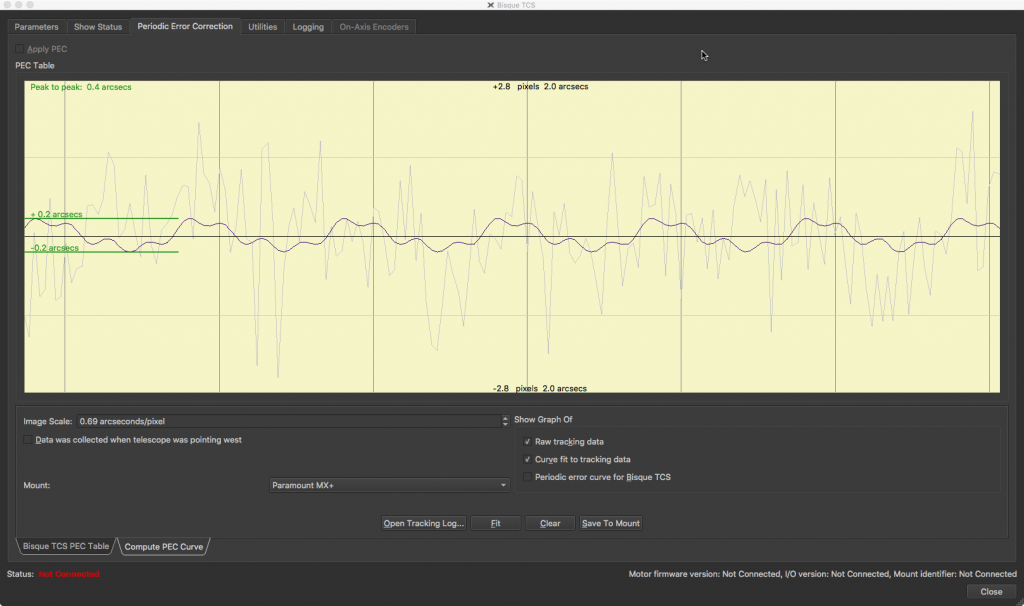 0.4 arcseconds peak-to-peak residual error with correction running (averaged out over the 7 worm cycles), with max including big seeing spikes of 2 arcseconds.

I tried a quick image with guiding turned on.  I’ve lost the guider log, but with 3-second guide exposures and light aggressiveness (40%) it was holding the image to under 1/2 pixel.  The resulting image in this 5-minute exposure has nice round stars: 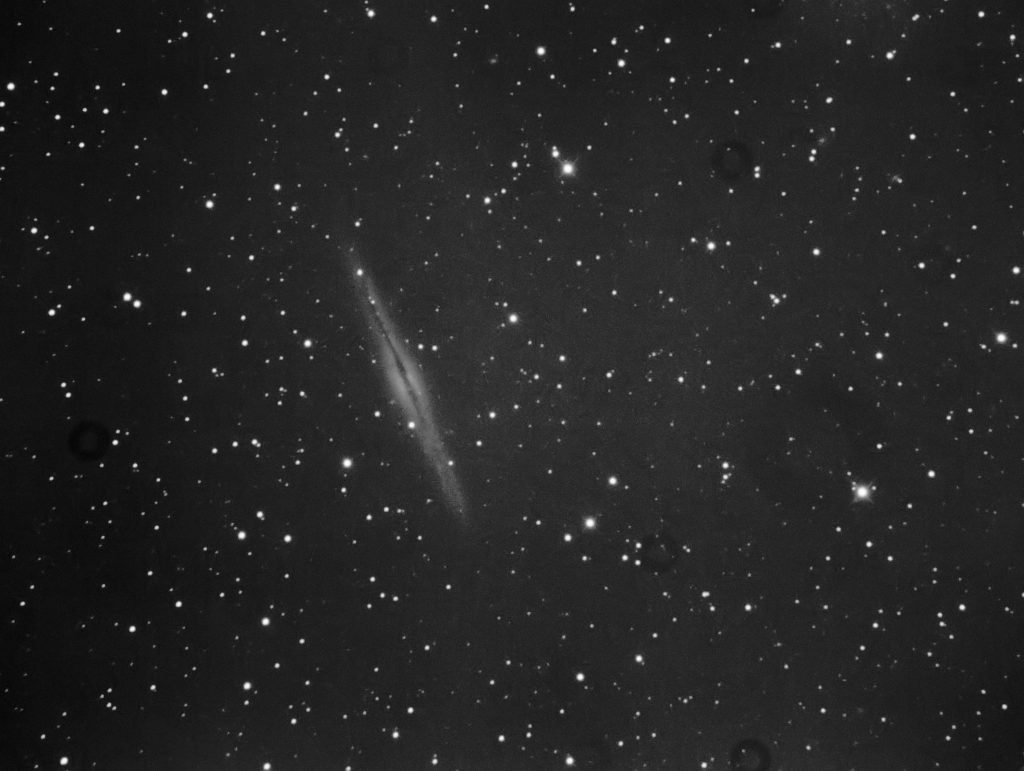 This seems to be avoiding an obvious question: what does an unguided image of some substantial length look like? I didn’t see the point of doing that test yet, since unguided imaging is substantially enhanced by ProTack, which I haven’t configured yet.

Next clear night (several days away) i’ll do a small TPoint run to re-check polar alignment, then a large TPoint run to build a good model, then do some experiments with PEC, TPoint, and ProTrack all turned on, to see how long unguided exposures can be.

These TPoint runs will be much easier, and more accurate, now that I have installed the SkyShed’s PZT so I can roll the roof right out of the way.  Previous TPoint runs involved having to chase the scope around the sky with roof rotation – both inconvenient, and also likely introducing vibration.

The new RA worm block is installed, and I had time for a brief test.  Testing was cut short because of a sudden cloud-over, but looked pretty good.  Next clear night I have a bit more testing to do.

Recall that I was unable, with all previous adjustments, to get uncorrected Periodic Error consistently below about 7.5 arcseconds peak-peak.  For example: 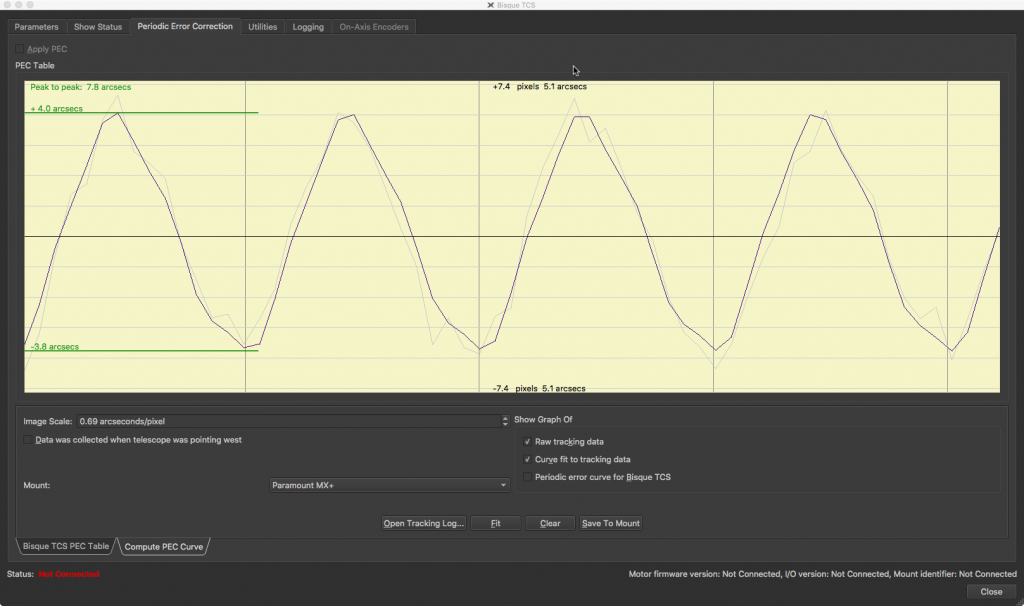 With the new worm block in place, here is a first uncorrected PE data collection: 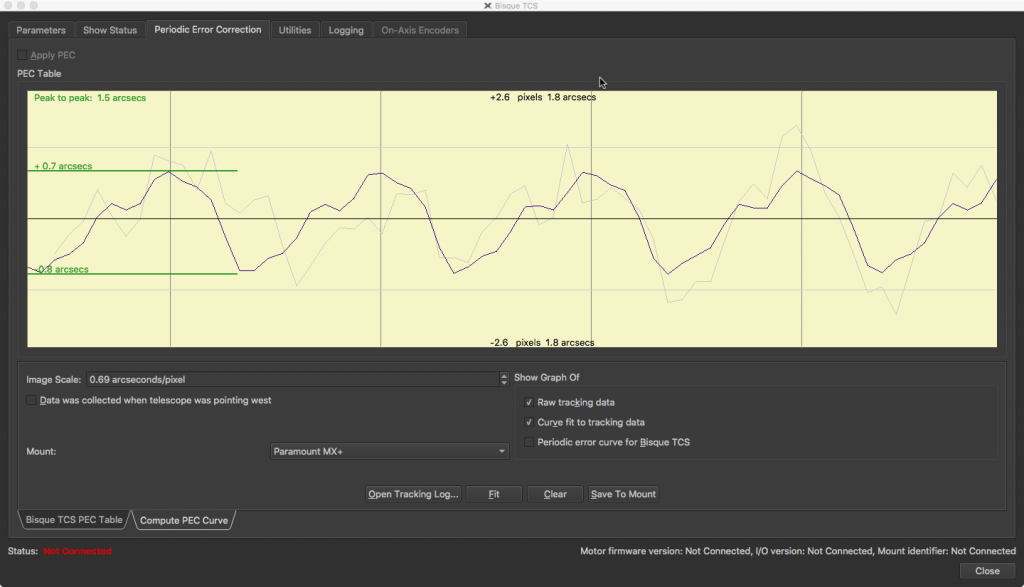 This is incredible – 1.5 arcseconds peak-peak, with no correction being applied.  More in a moment on why the curve is so jagged, but this is certainly great performance.

Then I loaded the above as a correction curve, and did another data collection with PEC turned on:

1 arcsecond, peak-to-peak.  The wild fluctuation that is just visible on the right edge of the graph is when the guide star was lost when the clouds suddenly moved in.  I deleted those data points to get this graph – but I guess I missed one.

Both of these – uncorrected and corrected – are, in fact, error smaller than the seeing fluctuation I have on a typical night.  I think that’s why the curves are jagged – that’s seeing bouncing around.

I was going to test this theory, when it suddenly clouded over.  So next clear night, I’ll do another set of runs (uncorrected and corrected) but with guiding exposures of 3 or 4 seconds.  The long exposures should “smear” seeing jitters out and, if I’m right about the effect of seeing, should produce smoother curves.  I’m looking forward to testing this.

I’d also like to do another data run just to convince myself that this isn’t “too good to be true”.  Did I do something wrong that resulted in this excellent performance?   I don’t think so, but I’d like to replicate.  Adding guiding to a PE of 1 arcsecond should produce a very stable image.  In fact, I’m interested in seeing how long an exposure I can use unguided – that would certainly be convenient.

Standby for another clear night.  Looking out the window, that’s not tonight.

Before dark, I finished re-connecting all the cables to the mount and related gear without doing any through-mount cabling.  Ran the mount and the rotator through their full ranges of motion several times to ensure nothing snags on anything.

My plan said to start with a new, small, TPoint run to verify polar alignment.  However, I decided to change that and do an initial check if the worm tension plungers are in-spec.  I thought that, if they aren’t, I should discontinue running the mount around with out-of-spec gears as soon as possible.  So, I checked the cam stop and worm spring plunger settings of both gear boxes.

I adjusted the cam stop to spec (1/8 turn out from bottomed-out).  It was already in more-or-less that position, so I don’t think it was out of spec.

Then I adjusted the 2 spring plungers.  The spec for these is “3 to 3.5 turns out from bottomed-out”.  They were a bit loose so, wanting them tighter, I set them to 3 – the tight end of the spec range.

Both of these adjustments can be done without removing the gearbox cover, so I haven’t yet inspected other components for tightness and tension – that will come later.

Again, cam stop seemed OK but I re-adjusted it to spec just to be sure.

Spring tension plungers were quite a bit too tight.  They were about 1.5 turns out from bottom, so I readjusted them to 3, per the spec.

Continuing to deviate from my carefully thought-out plan, I couldn’t resist doing a new Periodic Error data gathering run to see if those adjustments had any effect. 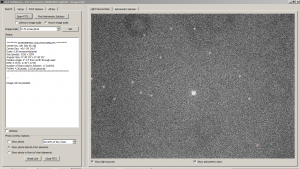 So, I carefully checked all the various settings that I have got wrong so many times: 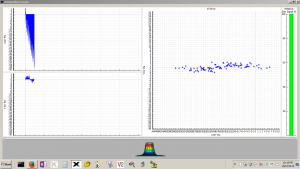 I gathered 1/2 hour of tracking data, which is about 8 worm rotations.  I used the main camera, binned 1×1.  During this data gathering, I noted that the guide star was showing up as 100% saturated.  This might be a problem – if it is over-saturating it may be difficult to calculate the FWHM radius.  This goes into the list of things to check next time. 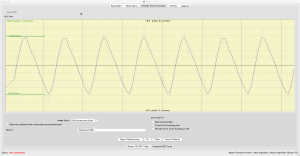 A quick analysis of the results shows it has certainly improved things.  Uncorrected periodic error is now at 7.7 arc-seconds peak-to-peak, down from 12.  That’s almost within spec (which is 7-7).

After I get back on-plan by checking polar alignment, I’ll do another test with a couple of minor additional changes:

It’s time to admit I have a mount performance problem

I am so impressed with the build quality of the MX mount that I’ve been reluctant to admit that there seems to be a performance issue showing up in my data. I think I’m ready to admit that now.

Symptoms of one or more problems

There are a couple of things that I’m sure are indications of problems, although it remains to be seen if there is a single underlying problem or several. The symptoms are

Periodic Error (PE) is out of spec. 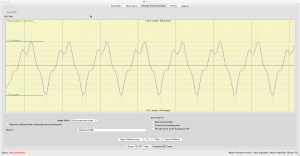 I gathered data incorrectly several times (mainly by forgetting to record the camera rotation angle, or to ensure it was 0 or 180), so it took me a while to see this. However, now I have reliable data showing I’m getting uncorrected Period Error of almost 12 arcseconds, peak to peak.

The spec for the mount is “maximum 7 arcseconds, peak to peak”. And this isn’t just marketing hype – most Paramounts do much better, and the SB support forums are full of examples of SB being horrified in the rare case when someone’s mount exceeds this spec, and of SB taking it seriously to correct it. 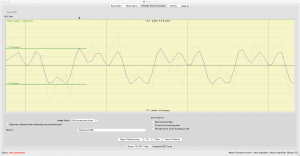 Note that with Periodic Error Correction (PEC) active, the mount tracks at 3.9 arc seconds, which is quite good. However, I think I should work on getting the uncorrected performance into spec.

So, I’ve resolved to work on this, with the minimum target of getting uncorrected PE into spec.

Next, I’m getting very strange behaviour in the Declination axis when auto-guiding. At this point I don’t have a good theory for whether this is the same problem as the PE above, or a separate problem.

When autoguiding, there is no reason why there should be Dec motion or Dec corrections at all unless Polar Alignment is off, or unless ProTrack is enabled and making corrections that it thinks are needed.

What I’m seeing in Declination is large-scale, slow-period oscillation in the Dec axis. Dec shows as being several arc-seconds off, but multiple successive autoguiding periods don’t seem to be able to correct it. Then it suddenly swings over to being several arc-seconds off on the other side of the axis. At no point does it converge to a “no or small error” state. (This image is a simulation since I forgot to take screen captures the last time I did this test.)

Aside from the obvious – that this indicates something is wrong – this also means that I can’t use dithering when collecting a series of images. After the first image, guider “settling” back within a specified error range never happens. RA settles quickly, but Dec just keeps oscillating from far-off on one side to far-off on the other side. 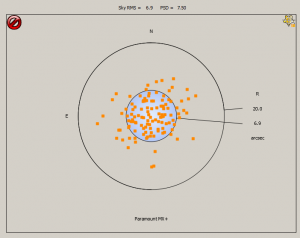 First, my TPoint model isn’t very good. The point-spread graph is quite spread-out, and quite oblong. This is probably just another symptom of the same problem causing the above issues. It could also be giving ProTrack ammunition to make bad adjustment decisions, compounding the problem.

Second, I note, when gathering uncorrected data for doing a PE calibration, that I’m getting a large measured declination drift, in addition to the expected periodic error in Right Ascension. I haven’t thought through the mechanics enough to know if this is normal or an indicator of a problem.

I spent quite a bit of time searching through the SB support forums and documents (which are not well organized, and not easy to search, by the way). Here are some miscellaneous points I’ve noted – in no particular order.

The most common causes of problems seem to be:

To be confirmed by experimental corrections and measurements, my hypotheses for my problems are:

I think the spring plungers on my RA worm gear are too tight. If they were too loose, it wouldn’t affect normal RA tracking (but would show up as backlash in slews, and in TPoint). Too tight, however, might be causing gear friction, stiction, or over-sensitivity to minor machining imperfections.

Through-mount cabling could also be contributing to uneven PE performance if cables are binding.

How to test this hypothesis:

I think the spring plungers on my Dec gear are too loose. Backlash could be causing the non-response to guiding adjustments, and is probably also polluting the TPoint model and causing ProTrack to make adjustments. Occasional ProTrack “adjustments” could be responsible for periodically throwing the Dec error to the other side of the zero axis.

Through-mount cabling could also be contributing to uneven performance if cables are binding.

How to test this hypothesis:

Plan to deal with it

So, here is the plan to work through this problem. The plan will need adjustments as data come in.