Sunday night I used the removable dome cover (via the PZT) to enable two automated TPoint data-collection runs.  (The PZT makes this practical because I can start the run and then go indoors while it operates.  Before the PZT I had to stay in the observatory and adjust the dome position for every “sweep” of data.  This was both inconvenient, and also probably affecting the results through the vibration of moving the dome.)

The first run was 56 data points, just used to refine polar alignment, which was reported as “Excellent” in azimuth and needing small adjustment in altitude.  After doing the polar adjustment, I did another, large, TPoint run of 360 data points. This confirmed polar alignment was now excellent in both axes, and I then used this to build a high-quality TPoint “supermodel”.

What’s all that mean?  It means that

With a good TPoint model and ProTrack, the mount is supposed to be capable of unguided imaging of fairly long exposures.  I decided to test that, by taking unguided images of M15 of various exposure lengths.  In the following images, PEC, TPoint, and Protrack are turned on, but not autoguiding.  These are unprocessed. 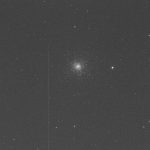 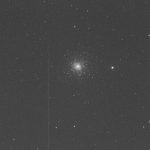 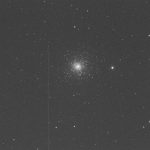 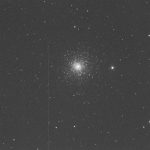 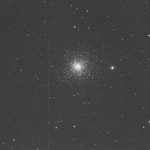 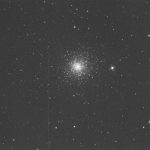 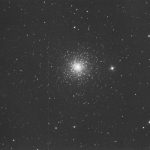 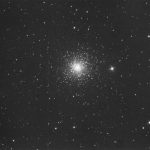 Before PEC, TPoint ,and Protrack, 20 seconds would be the longest I could go without noticing distortion in star shapes.

To my eye, the above are showing no star distortion up to and including the 300-second (5-minute) exposure, but the 600-second (10-minute) one is starting to show distortion.  So it would seem I can do unguided imaging for exposures up to, and slightly over, 300 seconds.  Wow.

It was clear last night, quite warm, although seeing and transparency were poor. More testing and calibration, and some real progress was achieved.

Now that I have focus perfect, and given my suspicion that I may be doing unguided imaging with this short refractor, I decided to re-do my PEC calibration. This time I used the main camera to get cooling and higher resolution. I captured about six worm cycles of data and recalculated the model. 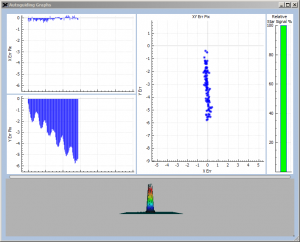 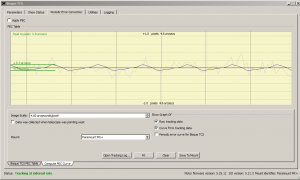 Gathering data like this can be done before it is completely dark, so it was a good way to spend the hour of dusk while waiting for the sky to become completely dark. In the process, I noted two important things:

So, I think I’m not going to worry about correcting those guide camera stars now, but, rather, see what I can do with unguided imaging. After all, this is a very stable mount, and I’m presently using a very short focal-length imaging scope. 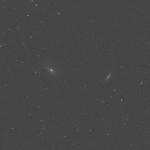 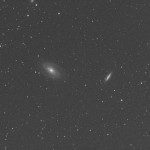 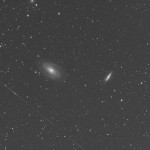 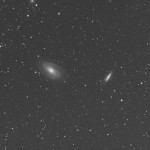 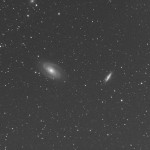 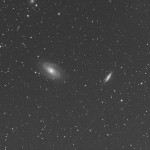 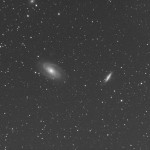 Ignore the badly distorted stars at the upper left edge of the field, and look at the center. While I think I may have a minor collimation issue with the camera, I can see no difference between the stars in the 10-second image and those in the 10-minute image. With this mount and scope, I clearly don’t need Autoguiding for exposures in the 5-10 minute range. So, I’m going to shelf my calibration of the Autoguider until later in the season when I switch back to a longer focal-length imaging scope.

It also occurs to me that I have a field flattener for short scopes in a drawer somewhere.  If I come back to serious imaging with this scope later in the season (which I might want to do for a very wide field shot, such as M31) I’ll try that flattener.

Now, since I have a nice image framed anyway, I thought I would do some trial imaging of that M81 – M82 shot. I took 10 five-minute sub-exposures, unguided, and then a series of flat fields using the light panel mounted in the observatory. I already have a calibrated dark frame for use with this camera.

There sure are a lot of satellites in that part of the sky.  Lots of satellite trails to be removed.  Fortunately, the data rejection procedures in CCDStack make that fairly easy. 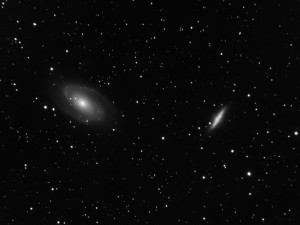 Here is the result, calibrated, combined, and cropped. (Still just a test – not a finished product, which would need better noise removal, scaling, etc.)

I would not have imagined I could get results like this unguided. This truly is a wonderful mount.

A final note.  I’ve had several major static electricity shocks over the last couple of days, and I don’t remember this being a big issue in the past.  Twice tonight, a piece of equipment actually reset after a static spark.

What’s changed?  I think the answer is the new vinyl cover on the dome – I used to have a woven polyethylene cover, but switched to this vinyl one last year.  Maybe dragging the vinyl cover off the plastic dome is generating the charge.  Running a ground wire to the dome is now on the to-do list.