Clear tonight, but not dark until quite late.  (Duh. That’s what I get for re-starting the observatory only a few days after Solstice.)

I did new polar alignment tonight:

After that I did a few test slews.  Slewing to M27 from far away, it landed dead-on, precisely centred. 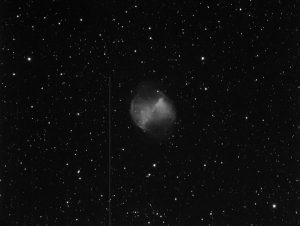 Just for fun I did a quick 60-second exposure while I was there.  It looks pretty good, so I’m hopeful I’ll see improvements.  This image is uncorrected (no darks or flats) and, more important, has no Periodic Error Correction running.  PEC training will be my next evening’s activity.  I won’t really know how the mount is performing until I see that Periodic Error graph.